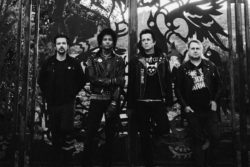 Southern Lord presents Gloom Ballet, the debut LP by Los Angeles-based dark punk act, THE WRAITH. As the anxiously awaited album nears release this Friday, it is now streaming in its entirety exclusively through Kerrang! Accompanying the piece, the band’s own Paul Rogers provides a detailed feature on the history of THE WRAITH and their place in the LA punk circuit.

Stream THE WRAITH’s Gloom Ballet exclusively through Kerrang! at THIS LOCATION.

Gloom Ballet will be released worldwide via Southern Lord on November 29th. Find preorders at the label webshop HERE and Bandcamp HERE.

Several videos and lineup changes later – the band now completed by former Blink-182 drummer Scott Raynor and Brit bassist Paul Rogers – their evocative songwriting and pure-punk authenticity earned the ear of Mat Mitchell, who has worked with Love And Rockets, The Flaming Lips, Meat Puppets, King Crimson, and more. Mitchell recorded the band’s debut LP, Gloom Ballet, and earlier this year, the band signed to Southern Lord Recordings for the worldwide release of the album.