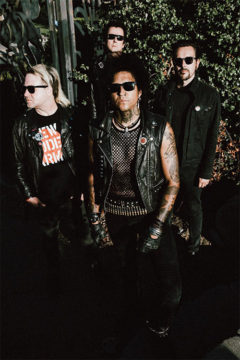 Directed, shot, and edited by Alisa Akay, the “Wing Of Night” video’s concept juxtaposes imagery reflecting the song’s lyrical themes – the embrace of pain, struggle, darkness, and inevitable (yet not truly final) death – with footage of THE WRAITH‘s lauded live performance, centered around frenetic frontman/poet Davey Bales. The band filmed the video over two days in a historic haunted theater in North Hollywood, just around the corner from producer Mat Mitchell’s studio where they recorded Gloom Ballet almost exactly a year prior. The band was keen to work with director Alisa Akay because, as Mitchell’s fiancée, she was intimately familiar with their music.

“Alisa would often drop by the studio during the Gloom Ballet sessions, and she later worked on some of Davey’s poetry videos,” offers bassist Paul Rogers. “So, she really gets our sound and vibe, and we loved her vision for the video.”

The video’s opening séance – conducted by The Wraith’s spiritual guide, psychic-medium Tiffany Retrozombie – was more real than intended: “Every time I closed my eyes I saw a blinding white light – I thought someone had turned on the production spotlights, but we were still sitting in the dark,” recalls guitarist Kaz Alvis. “When I mentioned it to the medium, her eyes got very big and she said it was a spirit trying to come through me.”

Kerrang! writes with their premiere of the video, “the band’s shadowy sound and black-drenched look are what brought death-obsessed punks into the fold since Dead Moon first twanged out of the darkness. As such, THE WRAITH offer a refreshing sound that is still scratches the classic punk itch at its root. The band’s new video for ‘Wing Of Night’ walks that line with endearing grace. The footage is stylized to look like it was found in a camcorder from 1984, and shows the band taking part in a Satanic Panic-style occult ritual.”

Gloom Ballet is available worldwide via Southern Lord Recordings at the label webshop HERE, Bandcamp HERE, and through all other providers.

The “Wing Of Night” video is the first of several new videos to be issued from the Gloom Ballet LP. Watch for new videos, tour dates, and more on THE WRAITH to be issued over the coming months.