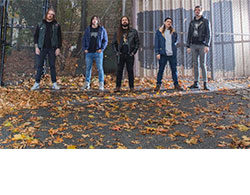 Road warriors POWER TRIP have added another massive tour to their 2017 itinerary, as the band will support Cannibal Corpse this fall. POWER TRIP will be out on the road supporting Obituary and Exodus on their massive North American tour from September 14th through October 14th, with Dust Bolt confirmed as the opener. That month-long venture is followed by a set at the Monster Energy Houston Open Air in Houston, Texas on October 15th, where they’ll share the stage with Avenged Sevenfold, Stone Sour, Mastodon, Suicidal Tendencies, Five Finger Death Punch, Marilyn Manson, Prophets Of Rage, and many others. October 22nd will see POWER TRIP at the Monster Energy Aftershock Festival in Sacramento, California, alongside Ozzy Osbourne, Nine Inch Nails, A Perfect Circle, Run The Jewels, Marilyn Manson, Mastodon, and tons more.

It has also been confirmed that POWER TRIP is one of the initial performers set to play at the inaugural Loudwire Music Awards ceremony in Los Angeles on October 24th. Black Sabbath’s Tony Iommi has been announced as the Courage Award honoree, and Judas Priest’s Rob Halford will be receiving the “Lemmy” Lifetime Achievement Award, in addition to performances by Body Count, Halestorm, Starset, POWER TRIP, and more to be announced.

POWER TRIP vocalist Riley Gale has been documented performing with Volbeat at a recent concert the two bands played together, performing their track “Evelyn”. See the video RIGHT HERE.

Nightmare Logic, POWER TRIP’s most powerful effort yet, was released early this year to high critical acclaim and anticipation — their sophomore release does not disappoint. With hooks and tightness comparable to greats like Metallica, Pantera, or Pentagram, POWER TRIP punishes fans not only sonically but with pure songwriting skill. Nightmare Logic proves to be one of the year’s smartest and most crucial releases to spawn from the metal and punk scenes.

“You don’t need to be a metalhead to have a blast with Nightmare Logic… POWER TRIP’s fist-pumping choruses, ricocheting grooves, and ample charm are so animated that they leave us with something addictive and, well, fun. – Pitchfork / Best New Music

“possesses a certain monolithic quality Lemmy would admire: a massive rawness and a sludgy, heavy hopelessness that thrashes with punk immediacy and metal intricacy…it’s a track preparing for war” – NPR