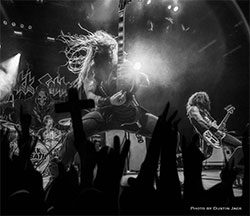 Preorders for Live In Detroit are available starting TODAY via Southern Lord at THIS LOCATION.

The three tracks comprising Live In Detroit were captured at the band’s thundering performance at The Fillmore in Detroit, Michigan on October 28th, 2016. Southern Lord will release Live In Detroit as a one time, vinyl-only pressing in multiple color variants. Additionally, the band will have the Live In Detroit LP available for purchase throughout their upcoming tour (see dates below).

Check out the music video for “War Pigs,” directed by Justin Reich, HERE.

ZAKK SABBATH will embark upon their first ever US headlining tour next month, paying tribute to heavy metal’s most important band of all time. The month-long trek will commence on May 18th and run through June 17th with included stops at this year’s Rock On The Range and Rocklahoma. See all confirmed dates below.