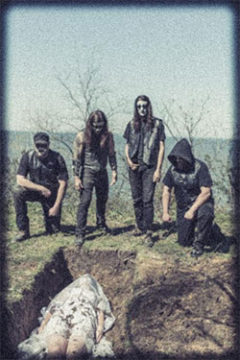 As Southern Lord prepares to release the Embryonic Devils debut LP by Ohio black/death metal sect CRYPT ROT this Friday, the entire album has been unleashed upon the public through an early stream at No Clean Singing.

Formed in 2016 by a crew of scene veterans including several current/former members of Homewrecker, CRYPT ROT enlisted Bill Korecky at the Mars Compound (Integrity, Ringworm, Homewrecker) for the recording of Embryonic Devils, the resulting anthems delivering a crushing a high-gain sound that will grab listeners with its ferocity.

No Clean Singing offers in part of CRYPT ROT‘s auditory horror, “Because I’m a slobbering, slavish fan of old school Swedish death metal, Embryonic Devils lit me up like a gasoline-soaked torch. The riffs have that massive, corrosive, toxic sound that one associates with the style, and with the aid of a skull-cracking rhythm section, they’re used to hurl the listener into a war zone, mixing barrages of automatic weapons fire and crushing tank attacks – and occasionally devolving into a doomed stagger… in a nutshell, Embryonic Devils will brutalize you, energize you, and fill you with skin-crawling dread.”

Embryonic Devils shall be released via Southern Lord on LP and digital formats this Friday, April 28th; preorders are available HERE.

CRYPT ROT has just filmed a video for the track “Pit Of Morbidity” which will see release in the weeks ahead. The band also recorded three new songs, which will later appear on a split release with Scorched. The band plays a local record release show for Embryonic Devils this Friday, and will then hit the road with Southern Lord labelmates Like Rats for a short tour through through Cleveland, New York, Philadelphia, Buffalo, and Columbus. Stand by for further updates and tour dates to be announced.