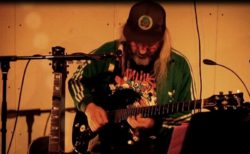 Southern Lord will issue the Age Of Paranoia LP by Dutch hardcore punk kingpins VITAMIN X in less than a month, the band’s first title for the label. As the release date closes in, the newest single has been released in the form of a Revolver Magazine premiere of “Flip The Switch,” which features guest guitar work by J Mascis.

The newest chapter in the VITAMIN X lineage, Age Of Paranoia, was recorded by Igor Wouters at ARC Studios in Amsterdam. Packing sixteen volatile tracks into a white-knuckled twenty-eight minutes, Age Of Paranoia surges with rapid-fire punk angst packed with ripping rock leads and raised-fist gang-chant anthems. The album includes several special guest guitar solos by J Mascis (Dinosaur Jr., Witch) and Bubba Dupree (Void, Soundgarden, Dave Grohl’s Probot, Brant Bjork), and is completed with cover artwork by Marald (Baroness, Kylesa, High On Fire).
New single “Flip The Switch” features an empowering solo by J Mascis which spans the entire track. Revolver states of the song, “It’s a very Annihilation Time, mid-period Black Flag-y ripper that’s perfect for the pit or washing down a cold one with another cold one (sorry, straight-edge homies). Either way, don’t miss Mascis tearing a hole in the universe with a solo over the entire thing.”
Stream the raging VITAMIN X anthem “Flip The Switch” with J Mascis at Revolver Magazine RIGHT HERE.
VITAMIN X guitarist Marc Emmerik recounts the experience: “We had this song with a Dinosaur Jr. type of intro. I thought it’d be perfect to let J Mascis do the solo. My friends Graham Clise (Witch, Lecherous Gaze, Annihilation Time) and Dave Sweetapple (Teepee, Witch) got in touch with him and he agreed to do it, he actually had one of our albums because John Brannon (Negative Approach) sang on it.
When J passed through Amsterdam he played the solo on my 1980 Gibson SG. He said he never plays Gibson but it has J Mascis all over it and it’s one of his most furious solos ever in which he seems to revisit his hardcore roots, as he was in hardcore punk band Deep Wound before Dinosaur Jr.
The funny thing is, J’s solo runs from beginning to end, more than two minutes! When he started he didn’t stop and ran his solo through the entire song, even over the vocals. After that first take I told him, ‘You only have to do the intro,’ to which he replied, ‘No, I’ll do the whole song; just take out whatever you want.’ When I came home and listened, we didn’t take out anything and kept his whole original solo since it’s insane and rips so much! I think this is the only song in hardcore punk with a two-minute solo from start to end!”
Southern Lord will release Age Of Paranoia on LP, CD, and digital formats May 18th; find preorder bundles HERE and digital at Bandcamp where you can stream “Modern Man” at Bandcamp HERE and through all digital providers.
VITAMIN X will be performing the material from Age Of Paranoia at fests and shows throughout 2018, having already announced a spread of performances through late summer. Watch for more tour dates to be announced throughout the year.
VITAMIN X Tour Dates:
5/03/2018 N8 Lounge – Bonn, DE
5/04/2018 TBA – Antwerp, BE
6/15/2018 TBA – SP
6/16/2018 Valles Escrema Fest – Montornes del Valles, SP
7/06/2018 Flugplatz – Zwickau, DE
7/07/2018 RIIP Fest – Tours, FR
7/14/2018 Woodstick Fest – Lage, DE
8/03/2018 TBA – Wroclaw, PL
8/04/2018 Novy – Jicin, CZ
8/05/2018 TBA – Bratislava, SK
9/07/2018 Chimpyfest – London, UK
9/14/2018 Punk Rock Weekend Fest – Stockholm, SE
9/15/2018 TBA – Troisdorf, DE
VITAMIN X has unloaded their energetic brand of rock and thrash-soaked hardcore punk since the late 1990s. Having operated through diehard DIY efforts, the band has amassed an arsenal of albums, EPs, singles, splits, and more across a wide array of underground labels, including Havoc Records, Tankcrimes, Underestimated, AgiPunk, Refuse Records, and many others. Their most recent two LPs were recorded by Steve Albini (Nirvana, Iggy Pop, Neurosis), and their 2016-released ”About To Crack” video went viral and reached more than a million views.
Well-known for their energetic and explosive live shows which attract fans from across the metal, punk, and rock spectrum, VITAMIN X has toured around the world several times, from Japan to the United States, from South America to Southeast Asia, and beyond. The band has played on MTV and many large fests including Hellfest, Maryland Deathfest, and many others, and recently toured with Baroness and Harley Flannagan’s Cro-Mags.
For review copies of Age Of Paranoia and interviews with VITAMIN X in The Americas contact dave@earsplitcompound.com and elsewhere contact lauren@rarelyunable.com.
https://www.facebook.com/vitaminxhc
https://vitaminx.bandcamp.com
http://www.southernlord.com
http://southernlord.bandcamp.com
https://www.facebook.com/SLadmin
http://twitter.com/twatterlord