BAPTISTS: Title Track To Beacon Of Faith LP Streaming On All Platforms As Album Nears May Release Via Southern Lord 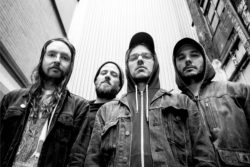 “Beacon Of Faith,” the title track to the impending third LP by Vancouver, British Columbia-based metallic hardcore punk outfit, BAPTISTS, is now available on all digital platforms ahead of the album’s release through Southern Lord later this month.
Beacon Of Faith was recorded at Godcity in Salem, Massachusetts with Kurt Ballou in July 2017, and mastered by Brad Boatright at Audiosiege in Portland, Oregon.
Stream the BAPTISTS track “Beacon Of Faith” via iTunes HERE and Spotify HERE, as well as all other digital providers.
Southern Lord will release Beacon Of Faith on all formats on May 25th; the vinyl has been slightly delayed. Find preorder bundles – including reissues of the band’s prior albums, Bushcraft and Bloodmines – at the Southern Lord webshop HERE, and digital preorders and stream the track “Capsule” at Bandcamp HERE.
Watch for BAPTISTS tour dates and more on Beacon Of Faith to be announced shortly.
Though the Beacon Of Faith album is densely-packed, yet BAPTISTS‘ sound is far from claustrophobic. There is melody amongst the dissonance, as the band more deeply explore the noise rock vistas that have always underpinned their sound. The album broadly follows the same trajectory as its predecessors — Bushcraft (2013) and Bloodmines (2014) – combining the style of raw adrenaline-fueled emotion, venomous vocal delivery, gigantic guitar sound, and a visceral rhythmic propulsion; a sonic manifestation of desolate rage, bolstered by a palpable sense of urgency.
The lyrics on Beacon Of Faith are drawn from the members’ direct experience of a broken society and general discontentment with everyday life. A multitude of issues are in the firing line, from the Canadian court system, issues surrounding substance abuse, mental health, and how the more fortunate tend to dismiss people who have been dealt a less-fortunate hand.
For review copies of Beacon Of Faith and interviews with BAPTISTS in the Americas contact dave@earsplitcompound.com and otherwise contact lauren@rarelyunable.com.
http://baptists.bandcamp.com
http://www.facebook.com/pages/BAPTISTS/111676572202547
http://www.southernlord.com
http://southernlord.bandcamp.com
http://www.facebook.com/SLadmin
http://twitter.com/twatterlord