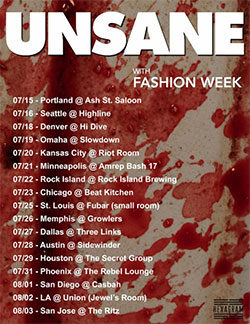 New York City noise rock kingpins UNSANE begin their Western US tour advancing their Southern Lord-bound eighth studio album, Sterilize, this week. The band has issued a trailer for the tour which includes the public’s first dose of the album’s damaging tones.

See the new UNSANE tour trailer created by Chariot Of Black Moth at THIS LOCATION.

Closing a five-year gap since the 2012 release of their Wreck LP through Alternative Tentacles, UNSANE makes a vicious return with the pummeling Sterilize, a record that recalls the most defining elements of the band’s seminal albums, surging with their unrelenting singular sound created by guitarist/vocalist Chris Spencer, bassist/vocalist Dave Curran, and drummer Vinnie Signorelli. Sterilize was produced by UNSANE, recorded by Dave Curran at Gatos Trail Studios in Yucca Valley, California, mixed by Andrew Schneider at Acre in New York City, and mastered by Carl Saff at Saff Mastering in Chicago. Sterilize showcases UNSANE sounding as dense and damaging as ever, and sees them remaining as necessary as ever, nearly three decades since they began.

Southern Lord will release UNSANE‘s Sterilize on LP, CD, and digital formats on September 29th; watch for audio samples, preorder links, additional tour dates, and more to be issued in the days ahead.

Since 1988, UNSANE has pounded the planet with their caustic grooves and foundation-crumbling riffs, having released LPs through a wide range of labels including Matador/Atlantic, Amphetamine Reptile, Relapse, Ipecac, Alternative Tentacles, and others, not to mention a wide range of singles, splits, and live albums. The band’s gnarled blend of punk, metal, noise, and hardcore helping to define the “AmRep sound” alongside other forerunners of the style, Today Is The Day, The Jesus Lizard, Helmet, Tad, Cows, Halo Of Flies, Melvins, and others.

Review copies of Sterilize will be issued in the weeks ahead. For coverage of UNSANE in North and South America contact dave@earsplitcompound.com and in Europe and beyond contact lauren@rarelyunable.com.