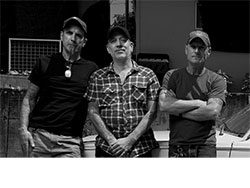 NYC’s long running kings of noise rock, UNSANE, offer their eighth crushing album with Sterilize, the record set for release this Friday through Southern Lord. Advancing the album’s release, Noisey has interrogated the band and is now streaming the record alongside the interview. Closing a five-year gap since the 2012 release of the Alternative Tentacles-issued Wreck LP, UNSANE makes a vicious return with Sterilize, a record that recalls the most defining elements of the band’s seminal albums, surging with their unrelenting singular sound created by guitarist/vocalist Chris Spencer, bassist/vocalist Dave Curran, and drummer Vinnie Signorelli. Sterilize showcases the group sounding as dense and damaging as ever, and sees them remaining as necessary as ever, nearly three decades since they began.

Days after the release of Sterilize, UNSANE will raid Europe on a massive tour that spans more than a month, running from October 5th through November 7th, including the new Southern Lord showcase in Amsterdam on October 29th alongside Magma, Sunn O))), Okkultokrati, Wolfbrigade, Circle, Big|Brave, and Vitamin X, after which the band returns stateside and embarks on the newly-announced North American tour. Leading with the two previously-announced Brooklyn shows on November 16th and 17th, twenty-four new shows have been announced, which sees UNSANE winding clockwise around the country and into Canada, the tour ending December 19th in Philadelphia.

Review copies of Sterilize and interviews with UNSANE are now available. For coverage in North America contact dave@earssplitcompound.com and internationally contact lauren@rarelynable.com.