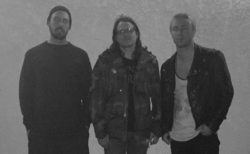 A new studio video of THE PRIMALS – the Los Angeles-based rock trio founded by current and former members of Darkest Hour, The Explosion, Dead To Fall, and more – has been featured at No Echo. All Love Is True Love, THE PRIMALS‘ debut album, features ten infectious tracks produced by John Reis (Rocket From The Crypt, Drive Like Jehu, Hot Snakes), and is nearing release through Southern Lord in early September.

THE PRIMALS is comprised of vocalist/guitarist John Henry (vocalist for Darkest Hour), bassist Chad Fjerstad (formerly of Dead To Fall), and drummer Andrew Black (formerly of The Explosion). The band’s fuzzy execution is equal slabs ripping guitar heaviness and infectious pop sensibility. Concocted by a seasoned group of thrashers with a historical backbone in D.C. punk community. The disintegrated spirit of grunge rises from the ashes, revitalized in a new light. The record is completed with cover art by Laura K. Giron. Fans of Wand, Ty Segall, Nirvana, and The Pixies must check this band out.

The short new video clip debuted by No Echo shows the band recording their All Love Is True Love LP with John Reis and is joined by an interview with all three members of THE PRIMALS, the zine offering about their debut album, “the record is a fuzzed-out riff fiesta with quirky yet pleasing hooks finding their way throughout the whole affair.”

Check out more on THE PRIMALS at No Echo RIGHT HERE.
Southern Lord will release THE PRIMALS‘ All Love Is True Love on CD, LP, and digital platforms on September 7th. Find digital preorders at Bandcamp where the track “Fortune & Sons” is streaming HERE, at iTunes HERE, and find physical preorder options at the label webshop HERE.

THE PRIMALS continues to announce live performances supporting the release of All Love Is True Love, including a Los Angeles record release show September 7th, followed the following week by release shows Washington, DC on September 14th and Brooklyn on September 15th. The band will also join the legendary ’60s garage rock act The Sonics at the newly-announced kickoff party for the return of The Power Of The Riff, November 17th in Los Angeles. Watch for new tour dates to be announced in the weeks ahead.