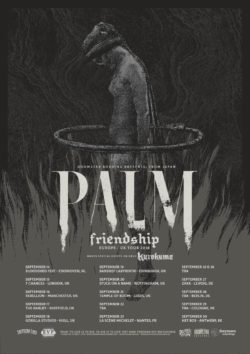 Stereogum declares of Hatred‘s vile attack, “tracks like ‘Life Sentence’ also showcase a riff dexterity and subtle multi-section mastery that evades a lot of genre-adjacent HM-2 steppers… Other bands would labor over a way to get the listener from Point A to Point B. FRIENDSHIP realizes that you don’t need much connective tissue if Point A and Point B both kick ass. And that’s the takeaway: While fast/slow, particularly punk-fast and sludge-slow, is one of the dustier tropes, to be a legitimate two-tool threat is still rare.” Svbterranean’s review includes, “From start-to-finish, FRIENDSHIP make quite the name for themselves on this monstrous, unforgivably heavy debut. Despite their name, FRIENDSHIP‘s music is the furthest thing from friendly.” Metal Trenches warns, “Hatred, as the name suggests, is a no frills, no bullshit slice of bitter hardcore and grind with no regard for your eardrums or well-being… Listening to this album conjures images of concrete slabs and dried bloodstains.”