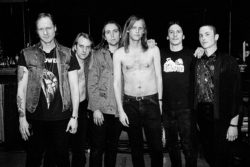 La Ilden Lyse – which roughly translates to “Keep The Fire Burning” – is an album of pure, cold, grim, rawness. Themes of enduring life, transcending death, worshipping the moon, and triumphant, satanic darkness are all at play here, and the album sounds harder, faster, and nastier than ever. No more messing around. Keep it black, keep it metal, all the time.

OKKULTOKRATI remarks, “Pushing beyond the grasp of simply life and death, crossing over despite one’s fleshy limitations and mortal flaws. Everything physical decays, rots and fades away, but ideas are forever. Transcending life, contempt/alienation/(self) hate/loathing are eternally constant. Embrace the frostbitten darkness and ride with us to the badlands.”

The band continues, “OKKULTOKRATI has always been more than being a band, making music, touring, and making music. Striving to be something beyond the mundane and trivial. It’s an attitude. In defiance. To everyone and everything. To not chase after trends. To seek truth in music wherever it takes you. To be an outsider and an outlaw, even though it makes you a freak. La Ilden Lyse is music for the misguided, the conspiratorial, the unappreciated and unwanted. It’s black outlaw metal. It’s a beacon in the dark, for desperate times.”

Southern Lord will issue La Ilden Lyse on May 15th. Find digital preorders where “Kiss Of Death” is also playing HERE as well as the Southern Lord Euro store HERE. US store physical preorders will post in the coming days.

Review copies of La Ilden Lyse and interviews with OKKULTOKRATI are now available. For coverage in North and South America contact dave@earsplitcompound.com and internationally contact lauren@rarelyunable.com.