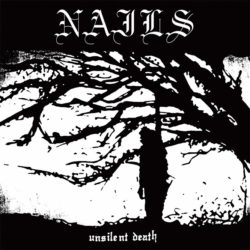 Southern Lord is preparing to release the 10th Anniversary edition of Unsilent Death by California’s NAILS on November 27th, with a new track “Enemy” available now via Bandcamp as preorders are activated.

NAILS‘ Todd Jones comments about this anniversary edition, “We’re happy that the record seemingly deserves a celebration for its ten-year anniversary. I hope people enjoy it.”