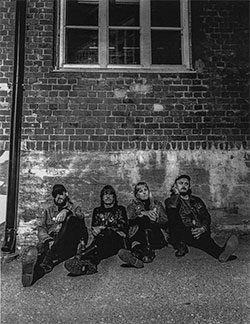 With the debut KOHTI TUHOA offers, “It’s one of the fastest songs on the album, and one of the last ones we finished writing before the studio. The machine gun drum roll is a perfect way to start the new album.”

Cvlt Nation declares, “Finland has been a hotbed for subversive d-beat since the early ’80s, and not too much has changed decades later. All you have to do is listen to the soon-to-be released LP from KOHTI TUHOA entitled Pelon Neljäs Valtakunta. This record is straight killer with no filler and is aimed at all downpressors worldwide.”

KOHTI TUHOA just completed their first North American tour earlier this month with a run through the East Coast US and Canada. A video of the band’s entire set from their Brooklyn show was captured via Max Volume Silence, playing HERE.

KOHTI TUHOA’s 2015-issued debut LP, Rutiinin Orja,was considered by many as the most exciting hardcore punk record out of Scandinavia in ages. Their sophomore album Pelon Neljäs Valtakunta is constructed from similar building blocks of aggression based at sociopolitical injustice, but with the band’s sound taking a step further towards genre classicists such as Discharge and Disorder, not to mention classic Finnish hardcore punk acts such as Terveet Kädet, Varaus, and Riistetyt.

Recorded in May 2017 at V.R. Studio in Turku, Finland, Pelon Neljäs Valtakunta was engineered by Jussi Vuola, mixed by Jussi Vuola and KOHTI TUHOA, mastered and cut by Jukka Sarapää at Timmion Cutting, and finalized with artwork by returning artist Jaakko Karjula. The album crushes twelve relentless tracks in twenty minutes, including a cover of “Saatanan Lampaat” by Painajainen.