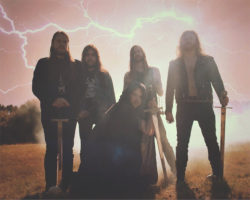 Worcester, Massachusetts-based HIGH COMMAND has just issued an official video for “Merciless Steel,” one of the most searing tracks from the band’s Southern Lord-released debut LP, Beyond The Wall Of Desolation.

Released in the Summer of 2019, HIGH COMMAND‘s Beyond The Wall Of Desolation delivers an onslaught of searing thrash/hardcore aggression. The band’s ravenous delivery is magnified by the powerful recording courtesy of Machines With Magnets (Daughters, The Body, Lingua Ignota), and mastering by Brad Boatright at Audiosiege (Obituary, Integrity, Black Breath).

urrounding the album’s release, HIGH COMMAND torched sectors of the country on tour with the likes of Spirit Adrift, Enforced, and more, and Spring 2020 saw them lined up to tour alongside Ringworm and others when the COVID-19 outbreak halted all plans.

Writes HIGH COMMAND‘s Ryan McCardle, “We had been planning on doing a big production metal video with swords and the like before the pandemic hit, but then we started going through all the footage we had collected from our first couple tours supporting Beyond The Wall Of Desolation and we realized we had all this great video of a time that seems almost alien and long ago considering the current state of affairs. Meticulously edited and directed by visual madman Chris O’Coin, the ‘Merciless Steel’ video is our ode to a community that was of the utmost importance to us and we hope returns someday soon.”

Metal Injection writes with their premiere of the video, “HIGH COMMAND released their thrash-mad album Beyond The Wall Of Desolation in 2019. If you missed it, or you’re looking for some skull-splitting riffs alongside a music video that looks like an old VHS, then you need ‘Merciless Steel’ in your life right now.”

Beyond The Wall Of Desolation is available on CD, LP, and digital via Bandcamp HERE and the Southern Lord webshop HERE.

Watch for new tour dates to be announced over the months ahead pending the reopening of venues and the return of live music around the country.