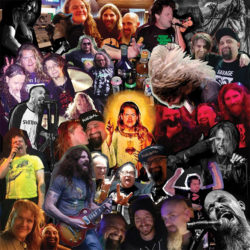 Decibel Magazine is hosting a new single by hardcore/punk super collective DEAD END AMERICA, formed by the late, great Steve “Thee Slayer Hippy” Hanford of Poison Idea, with current and former members of Queens Of The Stone Age, EyeHateGod, The Accüsed A.D., World Of Lies, Ape Machine, and more. The track acts as a warning shot preceding the release of the group’s debut EP, Crush The Machine, which was wholly captured before Hanford’s passing earlier this year, sees release through Southern Lord next week.

With the new single, “Bullet For 45 (Straight From a .45),” Tony Avila offers, “Songwriting-wise, we were aiming for a mixture of Poison Idea and The Accüsed.”

Mike IX Williams adds, “‘Bullet For 45 (Straight from a .45)’ is a rallying cry to fight back against a garbage infected, corrupted liar’s bullshit system and also a tribute to our late friend Steve Hanford aka ‘Thee Slayer Hippy.’ My only regret about this record is Steve didn’t live to see the final release, but I know he’d be proud of us. These songs are a timeless and much needed hardcore punk metal blast into the face of an untrusted authority…”

With the song’s premiere, Decibel writes, “Look no further than new single ‘Bullet for 45 (Straight From a .45),’ which will surely have me and every other contributor to this fine publication placed on a government watchlist, to get the gist of DEAD END AMERICA. Straightforward punk with rocking leads, the band accuse Trump of ‘making America stupid again’ and killing the American Dream.”

Stream DEAD END AMERICA’s “Bullet For 45 (Straight From a .45)” at Decibel RIGHT HERE.

The music for Crush The Machine was recorded at House Of Tain in Milwaukee, Oregon, The Magic Closet in Stayton, Oregon, and Mondo Generator Studios in Salton Sea, California. Mike IX’s vocals on “Bullet for 45 (Straight From A .45)” were recorded by Sanford Parker at Hypercube in Chicago, Illinois, and Blaine Cook’s vocals on “Searching For A Reason” were recorded at RGP in Portland, Oregon. The tracks were mixed by Mr. Ian Watts at The Magic Closet and mastered by Nick Townsend at Townsend Mastering, and the EP completed with cover art by Dirty Donny and layout by Emma Maatman.

Southern Lord will release Crush The Machine digitally next Friday, October 30th, with the 7″ vinyl to follow. Find digital preorders at Bandcamp HERE and the label webshop HERE.

Review copies of DEAD END AMERICA’s Crush The Machine are available. For interviews and coverage of the band in The Americas contact dave@earsplitcompound.com and in Europe contact lauren@rarelyunable.com.