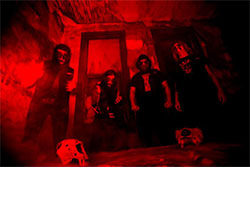 Still in their embryonic stages, CRYPT ROT was conceived in Ashtabula, Ohio in 2016, however members of the group have been cutting their teeth in various other bands for some time. CRYPT ROT was formed by lead vocalist/guitarist Ryan Sposito (former frontman of Homewrecker), drummer/vocalist Matt Izzi (Homewrecker, Scorched), guitarist Joe Dedomenic, bassist Steve Cray (formerly of Homewrecker) and since replaced by Aaron Schwarz, with additional vocals from Allie Dioneff.

For the recording sessions of Embryonic Devils, the band enlisted Bill Korecky at the Mars Compound (Integrity, Ringworm, Homewrecker); the collaboration resulted in five brand new death anthems, refined with a high-gain sound that will grab listeners with its ferocity.

Sample the tumultuous filth of “Chapters Of Torment” RIGHT HERE.

Embryonic Devils shall be released via Southern Lord in LP and digital formats on 28th April, preorder information shall be released soon. The band recently entered the studio again resulting in three new songs, which will later appear on a split release with Scorched.

This is just the beginning, let the Rot Begin. Welcome to the Crypt.