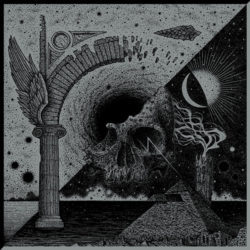 Revolver Magazine is now streaming “The Sorrowful Void,” the first song to be revealed from THE SECRET‘s scathing EP, Lux Tenebris, their first new material in six years, due out in August via Southern Lord.
THE SECRET ends the extensive period of decay since their 2012-released Agnus Dei LP, emerging with their first studio material in almost six years. Following three years without communication between members, the band regrouped under the same roof for the first time since 2015 to record Lux Tenebris, a three-song act in sonic exploration of the theme of the sepulchre.
The band offers with the new song’s debut, “The Sorrowful Void’ is a song that develops from the obsession for a riff and its repetition. It’s the very first riff that has been written for this new EP and that single riff constitutes the majority of the song. This type of density and repetition makes the riff turn almost into a texture that my mind visualizes as a sort of vortex or a magmatic eruption. It’s a riff that is meant to get lost into. The writing process for this song influenced the overall sound of the rest of the EP.”
Revolver declares, “Italy’s THE SECRET have washed away any sign of hardcore for their latest track ‘The Sorrowful Void,’ a black-metal burner propelled by HM2 and a heaping spoonful of vitriol. Efficient whether at full assault or half-speed, THE SECRET‘s dark atmospherics help guide the song, leaving a brooding and fog-ridden aesthetic from under which vocalist Marco Coslovich unleashes his bellowing cries.”
Expose THE SECRET’s “The Sorrowful Void” at Revolver HERE.

Southern Lord will issue THE SECRET‘s Lux Tenebris as part of the label’s special twentieth anniversary subscription series on August 31st with a small portion of the pressing to be available via label direct mailorder. The 12″ vinyl pressing bears the three tracks on the A-side, with a silkscreened B-side; the EP will also be released on all digital platforms.
Find preorders at the label webstore HERE, European store HERE, and Bandcamp HERE.

The twenty-minute Lux Tenebris EP sees THE SECRET abandoning the minimalistic approach of the previous two albums, the band expanding its sound by adding more layered and textural guitar work to the primordial destructive aggression that distinguished the Solve Et Coagula and Agnus Dei LPs. While still physical and confrontational, these songs show no concern for mortality and forget time and decay, creating new room for resonation and atmosphere. Lux Tenebris is an ode to the eternal night suspended beyond life and death. The signature sound of the band is pushed to its extreme by further developing the black metal and doom influences reminiscent of Southern Lord mid-2000s catalog, showcasing THE SECRET as one of Italy’s undeniably darkest bands in existence once again. Lux Tenebris was recorded by Steve Scanu and mastered by Brad Boatright at Audiosiege and completed with a cover illustration and layout by View From The Coffin.
Review copies of Lux Tenebris will be released shortly. For coverage of THE SECRET in The Americas contact dave@earsplitcompound.com, in Italy contact luca.pessina@anubipress.com, all others contact lauren@rarelyunable.com.