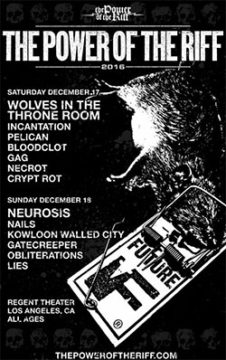 As the Los Angeles-based THE POWER OF THE RIFF festival event taking place next week rapidly approaches, the set times and more have been posted.
THE POWER OF THE RIFF begins with a now sold-out pre-party Friday, December 16th, with Venice crossover icons EXCEL headlining the show in support of the recent reissue of their second album, The Joke’s On You. Also added to the party are Inglewood powerviolence squad DESPISE YOU as well as local Los Angeles death-punk sect DETH CRUX.

Another batch of two-day passes have been released this week as the two main events are very close to selling-out. See all ticket options HERE.

See the trailer for THE POWER OF THE RIFF at THIS LOCATION.