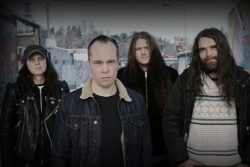 Swedish crust punk/metal outfit MARTYRDÖD has issued an official video for “Helveteslarm,” the new single from the band’s impending seventh album, Hexhammaren, set for release in North America through Southern Lord on May 10th.

As with prior MARTYRDÖD works, the recording of Hexhammaren was handled by Fredrik Nordström at Studio Fredman (Wolfpack, At The Gates, In Flames) in Gothenburg, Sweden.

“Helveteslarm” explodes in a bold new video produced by Jimmy Johansson and Super Lino Puro. MARTYRDÖD checked in with the following comment: “Helveteslarm: It’s the sound of hell on earth. The sound of evil forces ravaging the world for power. War dogs, warmongers using liberation as a pretext for profiteering. The video was planned and shot over a couple of days only a few weeks before release. The Idea was to portray some of the real driving forces behind armed conflict in the world and their ruthlessness.”

Southern Lord will release Hexhammaren in North America on May 10th, with Century Media handling all other territories. Find digital preorders at Bandcamp where prior single “Cashless Society” and “Helveteslarm” are streaming HERE and watch for additional audio previews, physical preorders, and more to be posted in the coming days.

Surrounded by ongoing European festival and live performances, MARTYRDÖD will make their US return next month, their first time playing in North America since the Southern Lord label tour in 2012. The band will join Soft Kill and Wiegedood supporting Skeletonwitch across the West Coast and Midwest from May 22nd through June 1st, with Portrayal Of Guilt, Devil Master, and others playing on select shows.

Review copies of Hexhammaren will be released in the days ahead. For coverage of MARTYRDÖD in North America contact dave@earsplitcompound.com and internationally contact Birgit.Luhmeyer@centurymedia.de.