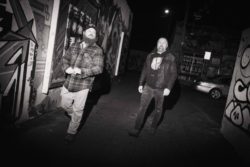 Salt Lake City-based duo EAGLE TWIN has announced a European tour this Autumn in support of their third album, The Thundering Heard (Songs Of Hoof And Horn), out now via Southern Lord. The tour begins in Utrecht, Netherlands October 4th and runs through October 14th, ending at Antwerp Desert Fest in Antwerp, Belgium.

EAGLE TWIN‘s commanding sound delivers like a tectonic force, where doom and blues collide. Gentry Densley’s dominating low-end vocal tone is like an instrument in itself, rumbling alongside towering riffs, and Tyler Smith’s powerful rhythmic propulsion. It is a compelling combination, particularly when you add melodious bluesy romp to the equation. Equally prevailing are the stories that shape EAGLE TWIN‘s musical output, drawing upon folklore, and strongly informed by recent happenings in the world. Observing our relationship to nature, and the band’s own surroundings in the dead salt seas of Utah are themes that feature frequently across their musical canon. The Thundering Heard continues where the previous album, The Feather Tipped The Serpent’s Scale ended.

“Gentry Densley sings in a squelchy growl like he’s doubled over clutching his gut, and his riffs project a similar kind of nausea. Along with Tyler Smith’s expansive, often cinematic percussion, Densley spins myths of the terrifying inhabitants of the (super)natural world: birds that seem prehistoric, wolves whose very presence feel like an omen, snakes that morph into antlers.” – Pitchfork

“the music is viscerally accessible, and deeply cathartic. It’s tempting to associate the record with the chaotic present day, but the record had essentially already been recorded as long as two years ago.” – Noisey

“They take the best of blues and doom and combine them into something that is slow, epic, focused and downright unique. Their most recent offering, A Thundering Heard, builds on the awesome sound they already established and takes things to the next level. 5/5” – New Noise Magazine

“Absolutely mesmerising…Continues their fantastical animalistic folkloric/mythic/poetic narrative with a noted switch in elemental milieu: the celestial, although still present to a degree, has been replaced by the terrestrial…Eagle Twin has carved out their own rift canyon dreams, and proves once again to be one of the most unique acts in the extreme music pantheon.” – Zero Tolerance

“Balancing heaviness, melody and expansiveness in order to take the listener on a journey.” – Louder Than War

“The Utah duo’s aggregate of dustbowl Americana, Tom Waits blues clank and Sleep/Melvins-level doom riffs felt heavy as shit and twice as fresh…unrelenting triumphant doom which feels implausible coming from a two-piece… arguably the fantastical visions this music inspired speak volumes about its vastness.” – The Wire

“Comprised of labyrinthine movements and buck harder than a spooked Clydesdale…This album’s balance of heft and hooks makes for a great entry point for those unfamiliar, while longtime devotees will undoubtedly find themselves kneeling at this duo’s antler-festooned altar of doom once again.” – Metal Hammer