BIG|BRAVE Announces Western US Tours With Deafkids, Sunn O))); A Gaze Among Them Out Now Through Southern Lord 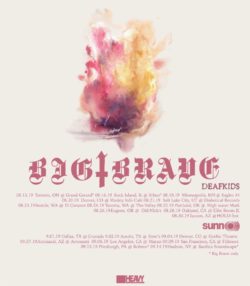 Montreal’s BIG|BRAVE announces new tour dates for this summer, including dates with Sunn O))), Deafkids, and more. The band continues to perform in support of their critically-lauded A Gaze Among Them LP, released in May through Southern Lord Recordings. Following recent tour dates in Europe with MyDisco and others, as well as North American tours with the likes of Primitive Man, Dreadought, Planning For Burial, and more, BIG|BRAVE will tour across the Western US in late August and early September.

Leading with two shows on their own August 15th and 16th, BIG|BRAVE will headline a run of shows running from the Upper Midwest down the West Coast with support from Brazilian trio Deafkids through August 30th. BIG|BRAVE will then join up with labelmates and familiar touring partners Sunn O))), supporting the group for a trek across the Southwest and West Coast from September 1st through 9th. BIG|BRAVE will tour their way back home with another set of headlining shows. Watch for even more tour dates to be announced in the days ahead.

Stream BIG|BRAVE’s A Gaze Among Them HERE, and see their “Sibling” video RIGHT HERE and the “Holding Pattern” video HERE.

A Gaze Among Them is available on CD, LP, and digital via the Southern Lord webshop HERE and Bandcamp HERE.

Since their inception seven years ago, BIG|BRAVE has remained loyal to a triad of key principles: space, volume, and raw emotion. That commitment to style and form has never been more evident than with A Gaze Among Them. Doubling down on their explosive chemistry, earsplitting dynamism, and sonic discipline, this new LP finds the trio more confident than ever.

A Gaze Among Them was spawned by a simple, but no less profound, question: “How do we take very little and make something bigger than what we actually have?” Toying with stark minimalism, melodic tension, and Wattie’s staggering vocal strength, the album serves as a culmination of BIG|BRAVE‘s near-decade of musical fearlessness. Anchored by their tried-and-true three-person lineup, A Gaze Among Them also enlists a who’s who of guest talent. With Thierry Amar (Godspeed You! Black Emperor, Thee Silver Mt Zion) on Contrabass and Seth Manchester on synth overdubs, A Gaze Among Them is BIG|BRAVE‘s most evolved, inclusive work yet.

For review copies of A Gaze Among Them and coverage of BIG|BRAVE in the Americas contact dave@earsplitcompound.com and abroad contact laren@rarelyunable.com.