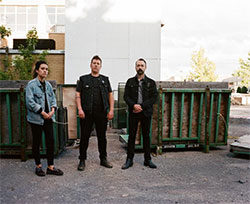 Since their inception in 2012, BIG|BRAVE has demonstrated the fluidity of experimental rock and put everything into their music until there’s nothing left to give. Their art in musical refinement expands ever gradually, unfurling into a very heavy, strong, and elevating force. As comfortable as they are with tidal waves of sound, BIG|BRAVE is unafraid to experiment with silence, oscillating between sparse, gentle arrangements and deep swells of noise.

Swirling static, booming guitars, powerful drums – all the hallmarks that have made them one of experimental rock’s most exciting acts today. The band’s first wave of dates for the new year has been announced, with a Spring tour across Europe and into Russia confirmed for April and early May, which includes a set at this year’s massive Roadburn Festival. Watch for more tour dates to be announced.

“the sound of the raw unconscious, turned up loud.” – Pitchfork

“sincere, long-form out-rock that ventures into different directions their music plays out in to moon-bleached grunge where serene vocals crumble over scraping guitars bled of melody. BIG|BRAVE chooses their silences carefully, oscillating between sparse, gentle arrangements and deep swells of noise.” – Cvlt Nation

“Montreal’s genre-defying post-rock combo BIG|BRAVE could very well be the most noteworthy recent heavy curiosity to come out of the city in recent years.” – Noisey

“…combines elements of Björk, Neurosis, The White Stripes, and Sunn O))) into a cohesive whole; but this whole is an ever evolving and challenging sonic mass.” – The Quietus

“a raw, evocative mix of slow-burning post-rock and metal that is somehow both wrecking-ball heavy and feather-delicate, with ferocious, barely-controlled feedback and mountainous, lingering chords. Wattie’s soprano both cuts through and lingers on the weighty sounds, with elusive vocalizations that verge on avant-pop.” – Bandcamp

“Ardor bides its time and it was made by a band brave enough to create music and a track listing that allows this spectacle of a record to satisfying inch towards a riveting pitch. It’s an album that evokes the ear blistering noise of Sunn O))) but it’s also emotionally charged music. BIG|BRAVE have somehow made a ruthlessly loud record that is also fascinating, and consistently elegant.” – Drowned In Sound

For review copies of Ardor and interviews with BIG|BRAVE in the Americas contact dave@earsplitcompound.com and in Europe contact lauren@rarelyunable.com.