ALL PIGS MUST DIE Announces West Coast Tour With Baptists In February; Hostage Animal LP Out Now Via Southern Lord 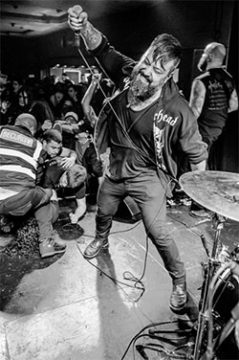 In support of their monstrous 2017-released Hostage Animal, ALL PIGS MUST DIE has announced a string of West Coast shows in support of the album. These shows follow the band’s East Coast record release mini-tour which closed out the year, and mark their anticipated return to the West Coast in five years. With Vancouver-based labelmates Baptists on the lineup as well, this will be a tour not to miss. Tickets go on sale Monday, January 8th at 10am in each respective market; see the full routing below.

ALL PIGS MUST DIE, now a five-piece with the addition of Brian Izzi (Trap Them) on guitar, is comprised of some of the most well-seasoned musicians on the eastern seaboard – Kevin Baker (The Hope Conspiracy), Ben Koller (Converge), Matt Woods, and Adam Wentworth (both of Bloodhorse). Hostage Animal is their most dynamic collection of work thus far and is an aural representation of the band as a whole; concise, intense, aggressive, and carrying a bleak world view. Available now from Southern Lord, Hostage Animal showcases that ALL PIGS MUST DIE is far more than the sum of their parts, and their fusion of crust punk, hardcore, and metal is more ferocious than ever before.

Hostage Animal is available through Southern Lord on CD, LP, and all digital formats; stream the album HERE and find physical orders in the US HERE and Europe HERE.

“…an album that touches on many of metal’s myriad subgenres without ever succumbing to their comfort zones. Rancid riffs and infernal grooves collide, while vocalist Kevin Baker’s foul bark further projects the sort of misanthropy and nihilism inherent in their overall sound.” – Noisey

“A monstrous, seething racket that splits the difference between racing hardcore and monolithic thrash-metal.” – Stereogum

For review copies of Hostage Animal and interviews with ALL PIGS MUST DIE in North and South America contact dave@earsplitcompound.com and internationally contact lauren@rarelyunable.com.