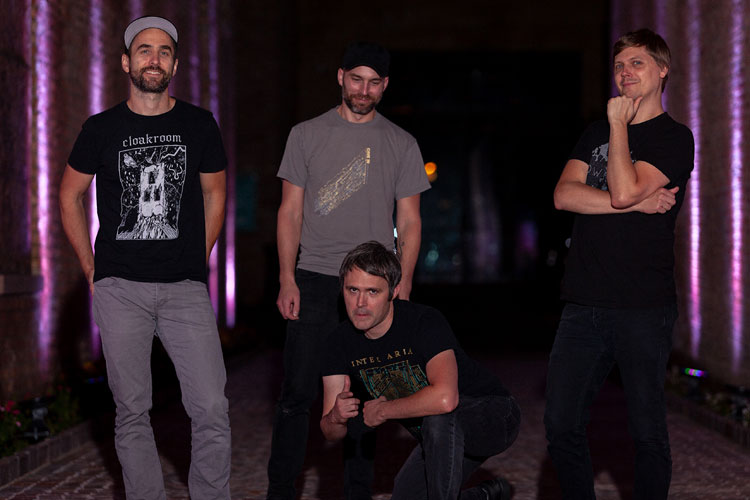 It’s been a long journey for Pelican—from their sludgy reductionist beginnings in the DIY spaces of Chicago, through their tenure as forerunners to the burgeoning international community of artists fusing post-rock’s dramatic melodicism with thinking man’s metal, and to their ascension into the canon of the elder statesmen in the brainy and brawny realm of the underground rock world. The band encountered no shortage of ups and downs along the way, and those peaks and valleys often found an analog in the moods and timbres of Pelican’s sonic palette, with youthful frustrations channeled into the unrepentant dirges of their self-titled debut or new opportunities afforded by their increasing popularity manifested in the expanded vistas of City of Echoes. In the process of writing their sixth album Nighttime Stories, the quartet endured a slew of realizations, tragedies, and glimmers of optimism that guided the creative process to the most potent album of their eighteen-year career.

One of the most profound shifts in Pelican’s operating procedure came with the departure of founding member Laurent Schroeder-Lebec back in 2012. Along with fellow guitarist Trevor Shelley de Brauw and drummer Larry Herweg, Schroeder-Lebec shared duties in the hallucinatory art-grind band Tusk, with the dual collaborations resulting in a near-psychic interplay between the musicians. The only added personnel for Pelican was bassist Bryan Herweg, whose familial ties within the rhythm section were evident with his in-the-pocket playing. Though Schroeder-Lebec’s exit had been planned with enough foresight for the band to gradually incorporate Dallas Thomas as a replacement, the alteration could be felt in their first album with a line-up change. Forever Becoming contained the requisite breadth and muscle of their earlier albums, but it also sounded more like a band that was focused on creating dimension in the studio as opposed to replicating the enveloping force of their live show. “It felt like it would have more musical continuity from the previous albums if the three original members handled the writing rather than approaching it with a new lineup,” Shelley de Brauw says of that album, but the subsequent years of playing together—whether in the practice space, the studio, or on stage—altered the writing chemistry for Nighttime Stories. “Rather than try to bend Dallas to fit into Pelican, we’ve all dug into our subconscious to find the shared similarities in our styles—particularly the era of the late 90’s and early 00’s where bands were beginning to push hardcore and metal in a more exploratory direction.”

While Pelican has frequently strayed from the unanimous locked-in riffage of their first few records in favor of more complex instrumental interplay, it’s hard to imagine an earlier incarnation of the band writing songs as meticulously crafted and detail-oriented as Nighttime Stories tracks like “Midnight and Mescaline” or “Abyssal Plain”, where the compositions recall everything from the triumphant call-to-arms of classic Dischord bands to the vicious troglodyte battery of the Melvins to the dynamic interwoven melodies of bottom-heavy indie cult heroes Chavez. But there’s also the requisite lurch and stomp of their early years, as evident on the unrepentant crusher “Cold Hope”. It’s the heaviest Pelican record in a long time, and it was at least partially due to the cultural climate. “We were halfway through writing the album when a significant portion of the country signaled that they were ready to publicly embrace totalitarianism, bigotry, and white supremacy, and the resulting dread and anger we experienced had a considerable effect on the shape of the material that followed,” Shelley de Brauw says with regards to the grim mood surrounding the album’s gestation period.

There were personal tragedies that informed the creative process too. Nighttime Stories was a title originally proposed for a Tusk record that never developed. Their vocalist Jody Minnoch passed away unexpectedly in 2014, and many of the song names and aesthetic themes on Nighttime Stories stemmed from ideas Minnoch floated past his bandmates shortly before his death. Additionally, many of the dissonant chord voicings and idiosyncratic structures that were part of Tusk’s signature sound began to surface on the album, so it felt appropriate to pay homage to their departed colleague. Thomas also experienced a heavy loss in his life with the passing of his father. The album’s opening track “WST” is a somber ballad performed on an acoustic guitar handed down from father to son, with his initials serving as the title.

Nighttime Stories isn’t entirely mired in bleakness. Though the album certainly veers towards the darker end of Pelican’s songwriting, the energized urgency on tracks like “Arteries of Blacktop” and sublime melodicism on songs like “Full Moon, Black Water” suggest a renewed vigor for the band. Perhaps it stems from three of the four members becoming fathers in the six-year gap between albums. Maybe it’s a product of rediscovering a common musical language as a reformulated quartet. Maybe it came from reuniting with Pelican and Australasia producer Sanford Parker for the tracking of the album. Tracked in their original stomping grounds of Chicago at Electrical Audio and bolstered by Matt Bayles’ mixing skills, Nighttime Stories throbs with guttural force in its most malicious moments and shimmers with beauty in the moments of respite.

Pelican have always excelled at vacillating between the savage sounds of various niches of metal underground and the more delicate and nuanced sounds of Midwest’s cerebral indie community, proving that they can make either end of the spectrum more vibrant and compelling through the art of contrast. With Nighttime Stories, the pendulum has swung back to the angst and ire of their younger years while delivering it with the nuance and wisdom that’s come with nearly two decades of writing and performing. Southern Lord is proud to offer up Nighttime Stories to the world on CD/LP/digital on June 7, 2019.