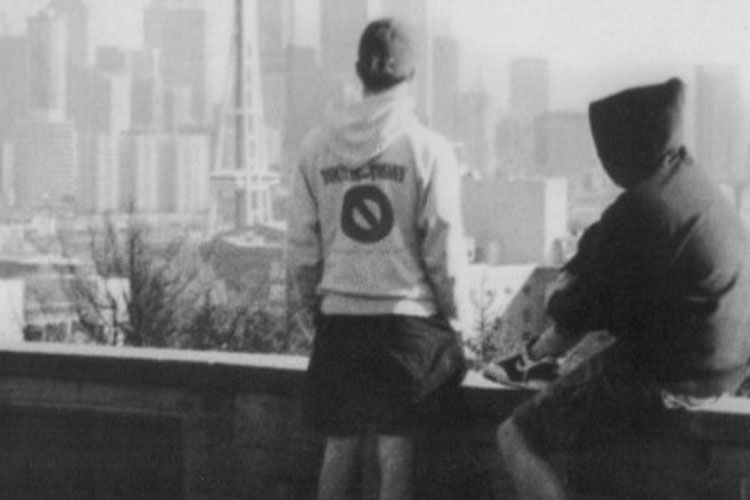 BROTHERHOOD was formed during the West Coast Hardcore surge in the same days of Insted, Bl’ast, Chain Of Strength and Uniform Choice, the members all bred in the Northwest on The Accused, Poison Idea, The Melvins, and with East Coast threads born of SSD, DYS, Corrosion Of Conformity and Straight Ahead all comparatively woven into their sound. A straightedge hardcore band that confronted racism, sexism and intolerance, both in their lyrical delivery and on stage with ill-mannered show attendees, BROTHERHOOD was a rare band of this scene as they were accepted in all of the subgenres of punk rock and hardcore, even receiving praise in the — at the time — very anti-straightedge publication MaximumRockNRoll, as they did in the many adamant straight edge fanzines of the time. This near universal acceptance can be clearly be attributed to the many years each member of the band had spent previous to BROTHERHOOD in bands, publishing fanzines, booking shows and promoting bands as well as the bands strong desire to buck most trends that came their way and forge something new.

The band was founded in Seattle by Greg Anderson in 1987, who recruited former False Liberty drummer Victor Hart, friend Ken Hagel on bass and East Coast transplant and Open Your Eyes fanzine editor, John White on vocals. After years as a singer in False Liberty and Inner Strength, Greg picked up the guitar and started writing songs built upon those previously mentioned influences. Following local shows and the opportunity to open for such legends as Youth Of Today, Angry Samoans and Fugazi, BROTHERHOOD began to gain recognition on a much wider scale in the hardcore community. This initial lineup was not to last, as in 1988, Ron Guardipee Of Hateful Youth took over on vocals and Nate Mendel of Diddly Squat joined on bass. Having played many times together in their previous bands things quickly came together for this new and much more solid BROTHERHOOD lineup and in November of that year the Music Bank recording session was conducted. Debuting this new lineup on the Pushead curated Thrasher Magazine’s Skate Rock Vol. 7 compilation BROTHERHOOD soon also released their “Of Friends” demo, their “No Tolerance For Ignorance” 7” on Skate Edge Records and “Words Run… As Thick As Blood!” 7” on CR Records, all released in 1988 and 89. Playing throughout the Northwest as well as a North American tour with quite possibly the bands biggest influence Seattle’s The Accused, by the end of 1989 BROTHERHOOD came to an end. Their relatively short-lived run went on to inspire many of the seminal bands that have followed in Hardcore and Straight Edge such as Undertow, Unbroken, Champion, No Tolerance and many more.

Members of BROTHERHOOD have posthumously forged numerous other musical endeavors including but by no means limited to Christ On A Crutch, Sunny Day Real Estate, Foo Fighters, Resolution, Digh Down, Burning Witch, Engine Kid, Sunn O)) and Goatsnake.