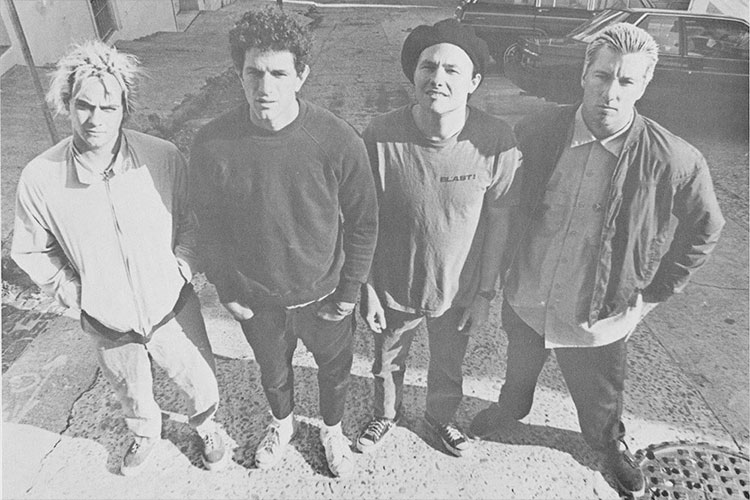 As far as stories of lost and found recorded material go, few tales can be told like this – where remarkably, all the pieces of the puzzle come together in fortunate ways, resulting in a brand new recording that surprised even the band themselves!

Having formed in 1982, the highly influential Santa Cruz hardcore legend: BL’AST! released their first album, The Power of Expression in 1985. This debut album completely blew everyone away and went on to become one of the highly sought after, “must- have” hardcore albums from the 80s’.

BL’AST! were beyond intense, continually pushing the boundaries of hardcore with their advanced musicianship, unstoppable energic delivery and explosive live performances. This overwhelming power caught the attention of SST records, who released the band’s second album, It’s In My Blood in 1987. Their third album Take The Manic Ride, was then released in 1989.

BL’AST!‘s wide-eyed, ambitious approach and intense perserverance became an influence for many bands to come. Shortly after the release of Take The Manic Ride the band broke up and their story was buried by time and dust….UNTIL NOW!

Earlier this year BL’AST! guitarist, Mike Neider contacted Southern Lord with news that he had found some mysterious old BL’AST! master tapes in a abandoned storage locker. Greg Anderson, fanatical about BL’AST!, wasted no time in sending the tapes to a studio to be baked. Needless to say, after 25 years gathering dust, the quality had deteriorated. Even when the tapes had been baked, nobody could have anticipated what would follow. With the tapes baked and audio digitised, Southern Lord contacted long time BL’AST! fiend, Dave Grohl about mixing this recording, his response was an enthusiastic “FUCK YEAH!, LETS DO THIS”!

Whilst inside Grohl’s famous 606 Studios (and with the Neve console as featured in the recent Grohl produced documentary ‘Sound City’) a remarkable discovery was made – a completely unheard, unreleased BL’AST! recording session from the mid-80s.

The lineup of the band at the time of the recording included second guitarist William Duvall (from Neon Christ & interestingly now the vocalist for Alice In Chains) who had moved from his hometown of Atlanta out to Santa Cruz on a tip from mutual friends, Corrosion of Conformity to join the band. Unfortunately his tenure with BL’AST! was short-lived and no recordings from that lineup were ever released.

From the thunderous bass intro of “Only Time Will Tell” to the apocalyptic warnings of “Its In My Blood” the album completely rips and rages from start to finish. All parties involved were completely amazed at how vibrant, unique and new the material sounded.

All things considered, it is miraculous that this record survived it’s journey and that everyone who was involved in bringing this recording to life, could be. Everything fell into place, when it could have easily crumbled along the way. This record is a time capsule that is meant to be heard!

There is no doubt in our minds that Blood will be a crucial purchase for any current Hardcore fiend as well as punk/hardcore fans who loved the band back in the day.