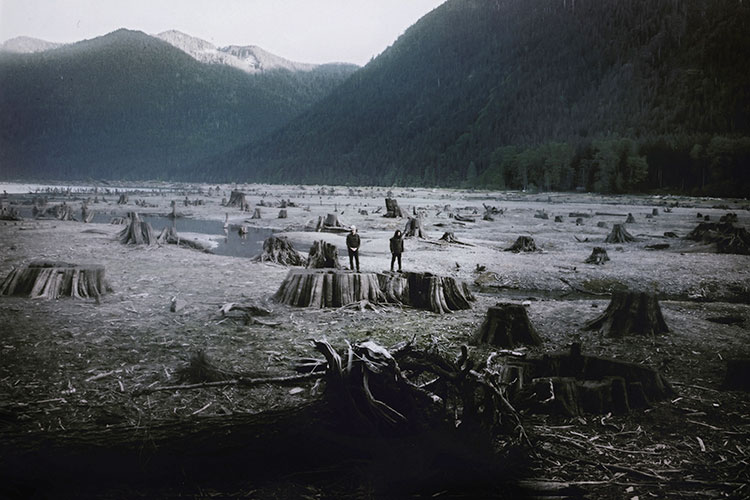 Since 2002, over the course of 4 studio albums and hundreds of live performances Wolves in the Throne Room have refracted the transcendent and mythic aspects of Black Metal through their own idiosyncratic Cascadian prism. The resulting essence is music that is intimately linked to the wild lands of the Pacific Northwest.

Their songs explore the hidden world of magic that one accesses through dreams, visions and music. As the mind altering pulse of the drums merges with seemingly infinite layers of guitar, an ocean-deep psychedelic soundscape coalesces. Time slows down, a portal opens and the blazing metal riffs collapse and shift into a dirge that invokes a misty other-world. In their songs, rain-drenched specters loom at the edge of the wood. Ancient cedar beings stir beneath their wet moss robes. One glimpses a bronze-domed temple rising among the firs.

In fall of 2013, their work reached a new level of refinement with the release of Celestial Lineage. In contrast to the bleakly hypnotic architecture of 2008’s Black Cascade, or the more orthodox forms of Two Hunters (2007) and Diadem of 12 Stars (2006), Celestial Lineage moved into a more expansive and visionary territory. The band’s trademark long-form approach to arrangement remained intact, but the album revealed a thread of star-lit pulse emanating from a bank of crumbling analog synthesizers woven with the intertwining guitar figures

2014 will see the release of Celestite, an instrumental, experimental companion record to Celestial Lineage. Celestite sees the band take a deeper excursion into the crystalline synthesizer-driven domains that have long intrigued them. With the aid of producer Randall Dunn, the band unearthed a hidden soundscape that is only loosely tethered to their familiar sound, yet is still unmistakably the work of Wolves in the Throne Room.

Wolves in the Throne Room