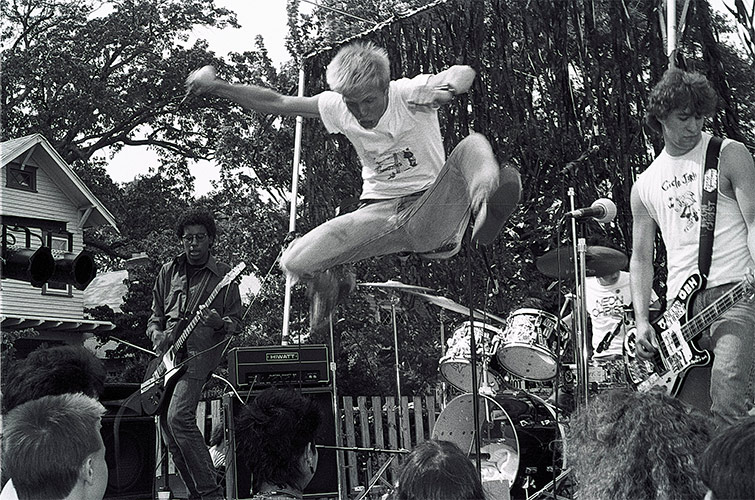 Neon Christ formed in the fall of 1983 with William ‘Kip’ DuVall on guitar, Jimmy Demer on drums, Danny Lankford on bass, and Randy DuTeau on vocals. They made their debut in the early morning hours of New Year’s Day 1984. That March, they recorded their eponymous debut 10-song EP. Released in June ’84, the EP’s songs exemplify the band’s signature musical diversity, from DRI-style thrashers like “Parental Suppression” to the atmospheric improv of “After.” A short east coast tour followed. On Labor Day 1984, the band recorded four tracks in the home studio of Nick Jameson, of Foghat fame. A few months later, “Ashes to Ashes” was included on the International Peace/War compilation released by MDC’s R Radical Records, bringing the band worldwide exposure.

Neon Christ shared the stage with the luminaries of 80s hardcore including the Dead Kennedys, Circle Jerks, and Corrosion of Conformity. In 1985, the band added Shawn Devine on second guitar, as the band’s sound and songs became slower, heavier, and more melodic. DuVall wrote an album’s worth of songs in 1985, but only “Savior (Drawn In)” was ever recorded, in the band’s last studio session on December 26, 1985 (the master tapes were lost). Returning to the four-piece original lineup, the band played a handful of Atlanta shows and then took a break in March of 1986. A few months later, William moved to Santa Cruz, CA, to join Bl’ast, and Jimmy, Danny, and Randy formed Gardens of…William later founded jazz/punk/world improvisers No Walls. He would later form Comes With the Fall and move the band to Los Angeles, where he struck up a friendship and musical collaboration with Jerry Cantrell. William joined Alice in Chains as vocalist and guitarist in 2006. On February 2, 2008, Neon Christ reunited to headline the Ratlanta Punkfest 2.

To this day, the band members have maintained a close friendship, as well as a desire to honor the legacy of the group. So when longtime fan Greg Anderson of Southern Lord contacted the group about reissuing a deluxe edition of Neon Christ’s 1984 sessions, “1984” quickly came to life. To remaster the original tapes using an all-analog process, William DuVall made multiple trips to Nashville to one of the few remaining studios maintaining the vintage technology to play and process the audio. Side one of “1984” features the original Neon Christ 7″ EP, and side two contains the four songs of the Labor Day session, all on heavyweight vinyl at 45 RPM for maximum fidelity. The package includes a full-color gatefold sleeve and a 12-page oral history booklet featuring dozens of never-before-seen photographs.